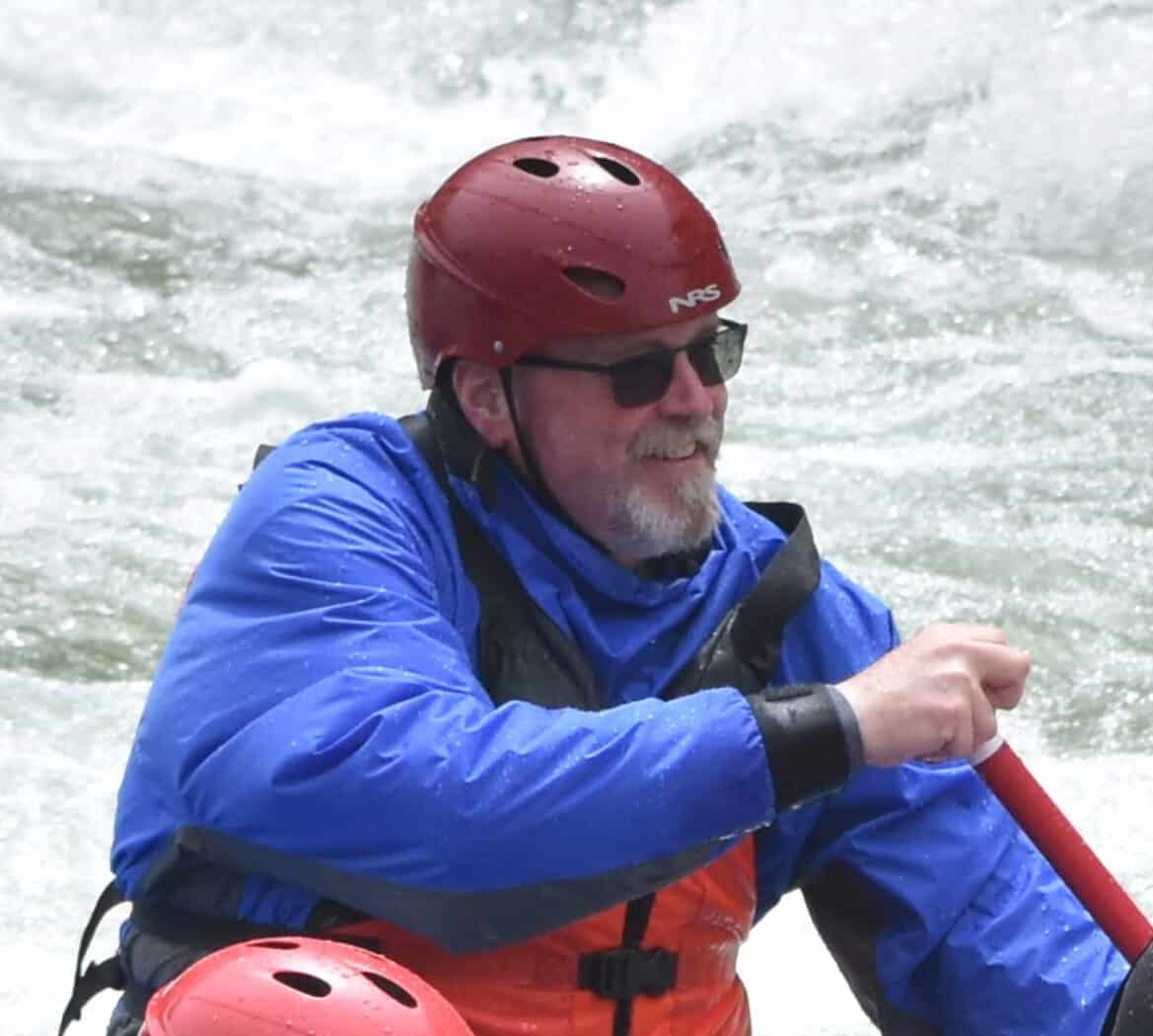 Kent Scown, Chief Operations Officer for the Southern Humboldt Community Healthcare District is a Humboldt native who graduated from South Fork High School in 1977. He subsequently earned a degree in Music from Humboldt State University, before becoming an integral member of local healthcare services, as a first responder and manager of the District.

From Student to EMT.

“Being an ambulance tech is like living a whole series of little short stories.”

When Kent returned home to Garberville after college, he joined the volunteer fire department, eventually moving into the role of Chief, a position he recently retired from after serving in that capacity for more than 25 years. “Tim Tietz has taken on the Garberville Fire Protection District Chief role and has already made many well-planned improvements. His dedication to the organization inspires me.”

After joining the department, he soon took a related interest in becoming a first responder. Over the next 15 years, Kent earned his EMT 1 and EMT 2 certificates, eventually taking on much more rigorous training to become a licensed paramedic.

At the time, the ambulance service was owned by Chris Christianson, under whom Kent worked as an EMT1 and dispatcher for local fire departments. When Christianson sold Fortuna and Garberville Rescue Ambulance to City Ambulance of Eureka, Kent stepped into a supervisory role and continued to respond to ambulance calls.

Working pretty much exclusively in Garberville, Kent remembers the excitement of his initial calls.  “There was a lot of adrenaline. My first twenty calls or so as an EMT 1, I was the ambulance driver, and I can remember my leg shaking so badly that I could not stop it.” But over time, Kent says, he learned to look at his work “in what I perceive to be a very healthy way. These are tasks I have to do. I didn’t cause the issue, I’m going to help the best I can, and this event will be over as soon as the paperwork is complete.”

“Being an ambulance tech is like living a whole series of little short stories. It’s interesting to understand all of the nuances of that circumstance, and then you just close the chapter,” Kent says of his experience.

Acknowledging that “you see a lot of awful things when you’re a first responder, especially on poorly maintained mountain roads where there are accidents all the time.” Thanks to new safety regulations on automobiles, including making airbags standard in new vehicles in 1998, Kent says first responders only rarely have to use the jaws of life to cut accident victims out of cars these days. “It’s actually gotten a little less horrific than it used to be. When I first started, we were exposed to a lot of brutal things.”

There was one call that ultimately changed Kent’s ability to maintain a healthy detachment after nearly 15 years on the job, doing tasks and being a crucial part of many people’s short stories. “One day, I was the supervisor in town, and I heard the dispatch to my mother’s home come over the radio.” Arriving to find his mother deceased, a stroke victim for the second time, Kent realized he could no longer serve as a first responder. “So, my mom dies, and I know a lot of people in her generation, and you want to take care of them, but you don’t want to see it. That was a turning point for me.”

His interest in becoming a first responder was sparked after his mother suffered her first stroke many years earlier. “If you don’t understand what is happening when a person is having a stroke or a seizure or whatever, it frightens you. Many kids have febrile seizures, and their parents are terrified their child is going to die when they don’t understand what is happening. We reassure them that this is something we can handle.”

“Kent soon found himself working 14-16 hour days to keep up.”

While still acting as supervisor of City Ambulance’s Garberville division, Kent was asked to serve on the Hospital’s Board of Directors. The Hospital was going through difficult times, and various re-organizational strategies were looked at, including one that would create a new position to be known as Materials Manager.

Because Kent had an interest in the new position, he recused himself from board discussions on the topic and ended up resigning from the board so he could apply for the job. He was hired in June of 1998.  “When I started, all of our data was on 3X5 cards written in pencil. It was kind of charming. It was how the world was then. The size of our Hospital was kind of mom and pop-ish.”

Kent helped modernize the facility and was good enough at his job that more and more responsibilities were added to his charge. IT, Engineering, and Dietary departments all came under his oversight, and Kent soon found himself working 14-16 hour days to keep up.

A managerial restructuring under former leadership redistributed many of the managerial tasks, and Kent now finds himself working more reasonable hours. “Every manager we have in every department are outstanding people, and I am really happy they’re here. They are very qualified and take what they do very seriously. This allows me to focus on projects like the new Hospital, the dormitory-style housing we are building across from the new Hospital, and a $5.6 million upgrade to the current facility.”

Building housing for temporary and short-term employees will free up as many as six homes the Healthcare District currently rents in town for staff.

The infrastructure upgrade Kent oversees will allow the skilled nursing facility to increase its capacity from 8 patients to at least 16 and perhaps 24, and includes an improved storm drain and sewer, a comprehensive heating and cooling system, and an emergency generator replacement.

Regarding the new Hospital, Kent credits Carolyn Hino-Bourassa, Foundation Board Chair, and Outreach and Foundation Director, Chelsea Brown for conveying the importance of the new Hospital to the community and getting the necessary fundraising effort in place. “It’s uplifting to see the commitment offered by so many donors,” he says.

He also has high praise for Chief Executive Officer, Matt Rees. “He does an enormous amount of good at bringing in the money. He understands how to work with the changing regulations and how to fight things that are detrimental to small organizations like ours. He advocates in Washington DC for rural health care. This place is doing remarkably well largely due to his leadership.”

Kent is pleased to be a part of the District beginning its mobile clinic services, starting in Shelter Cove and expected to expand to other communities. He counts improved services such as the recent hire of a Licensed Clinical Social Worker and a Substance Use Counselor to improve mental health services that are sorely needed in the community, as among the District’s accomplishments. Obtaining the CT scan machine made our Hospital better able to function in a diagnostic radiologic way. “Many people have not had to endure a ride in the back of an ambulance to go north for a CT scan.” He added the historical fact that Jerold Phelps himself once contributed $10,000 to a fund to acquire the sophisticated machine.

Improvements to the physical plant have occurred under Kent’s guidance, and he is especially pleased with the courtyard, which has helped to improve the quality of life for the skilled nursing facility residents. “Within a few days of opening up the path, patients were racing each other in their walkers around the tree. I love this courtyard.”

“Kent is proud to be a part of a visionary team that is moving healthcare forward in our community.”

Kent would love to see local youth who are interested in healthcare, pursue nursing or medical degrees and return to the area to work. “But if you don’t like it here, you will have the skills to write your own ticket.” Acknowledging the abuse suffered by nurses throughout the pandemic that caused many to leave the field, Kent still believes the profession is rewarding.

While agreeing with single-payer advocates that “care often suffers because insurance companies are always looking at a bottom line,” he does not support a single-payer system that does not allow a facility to develop a reserve. “My concern would be that you could never get ahead unless reimbursements were structured so that it allowed for building a reserve.”

Kent is proud to be a part of a visionary team that is moving healthcare forward in our community, as securely as possible into an unpredictable future. “We’ve built an excellent team here. We’ve identified the things we can do well, do them, and outsource what we can’t, such as billing.” In nearly 40 years of service to the community, Kent has been an essential part of transitioning local care from the era of 3X5 cards to a time when in the midst of a severe economic downturn, we can look forward to a brand new state-of-the-art hospital.

Submitted on behalf of the SoHum Health Outreach Department