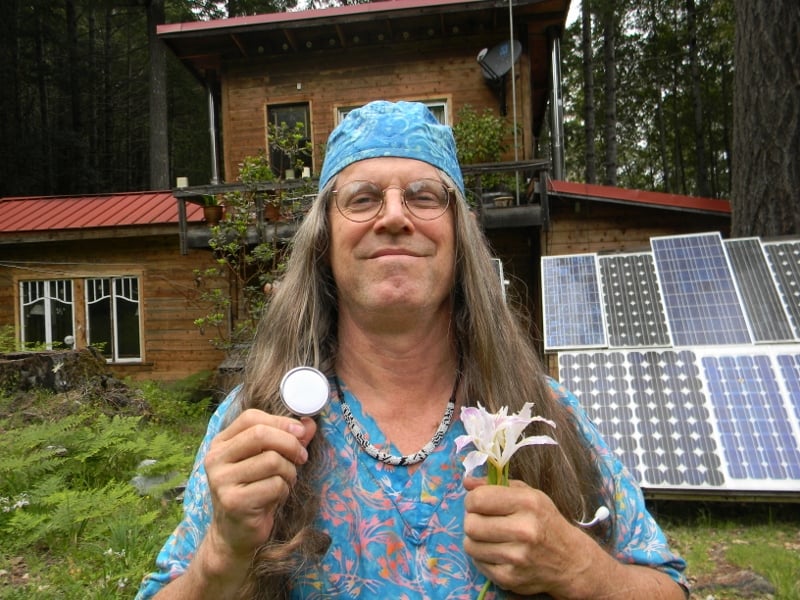 Karl Verick served as a nurse in the Southern Humboldt community from 1985 until his retirement in the spring of 2022. He worked for the hospital and healthcare district for the first 28 years and then took a position as a public health nurse for Humboldt County from 2013 until retirement.

“It was an interesting environment.”

Karl’s interest in medicine started young. “I was an art student, my father was an art teacher, but I always had a lot of capability in math and science. My three closest friends were all nurses’ aides and they talked a lot about the gratifying aspects of that.”

As manufacturing jobs that often paid better than nursing were disappearing from the Wisconsin economy in which he grew up, Karl applied for a job at a nursing home after high school graduation in 1975. “I was trained in-house and I did that for a skip year that I took before starting college. It was an interesting environment because most of the patients were older European immigrants and most of the workers, except for me, were middle-aged black women. The racial dynamics were really interesting.”

Karl started college as an art major who was also on the pre-med track when he realized “I didn’t have the motivation or the money to spend 40 hours a week studying. I had to drop a chemistry class to get a job. But I also knew that if I stuck with art I would end up being a waiter. I talked to a lot of vocational counselors and looked into a lot of different programs. At that time the physician’s assistant (PA) program was mostly medics coming back from Viet Nam.” Karl ended up deciding on a nursing major which would keep doors open to go on to PA or nurse practitioner school later.

“We were doing the kind of nursing that is disappearing now.”

After completing his nursing degree, Karl made his way to northern California in 1983. After being denied a nursing job in Mt. Shasta because of an x-ray of his back that indicated a predisposition for injury, he worked as a stained glass artist professionally in Mount Shasta for two years. Anxious that he might not get hired as a nurse if he didn’t use his degree in the field soon, he applied for a job at the Garberville Hospital. Shortly after he was invited to live on the land of SoHum friends Leib and Linda Ostrow in 1985. “I chopped off my hair and moved into a tepee up on Barley Hill.” After a delay in having his application looked at, then director of nursing Dian Pecora noticed Karl’s University of Wisconsin at Madison credential and he finally landed his first nursing job. “We were doing the kind of nursing that is disappearing now,” he said of his early duties at the local hospital.

He trained in two departments at the hospital that no longer exist. “I was a circulating nurse in surgery until 1992 when we stopped doing surgeries, and then I trained for OB (obstetrics) and delivery until that department closed in 1999.”  Karl worked his longest stint in the Emergency Room. In 2013 he changed hats and moved a couple doors down to work for the county.

“In my last ten years at the hospital I was mostly in the ER, and the character of the ER changed. The back-up call wasn’t there any more, the ER got busier and busier, I got older and injured my back, and there were things like having to pay for your own trainings that were different when working for the county. It was very attractive to work only Monday through Friday, only for eight hours.”

There were a number of changes to Karl’s duties when he made the switch, many of them attractive to a long time pro who had worked erratic and demanding hours in a hospital setting that went through a lot of administrative and structural changes over his career.

“As a public health nurse we weren’t allowed to do any hands-on care. We would assess people, and do education and do referrals.” Despite being ready to get out of the hectic ER atmosphere, Karl did miss giving hands on care. “I felt like I had a lot of expertise. Starting IV’s and being able to do a lot of procedures competently and fast, I was good at all that. I was the person they’d send for if no one else could get an IV started. I missed the immediacy of all that.”

Comparing the hospital structure with that of the public health department, Karl says, “The power structure is really different. At the hospital the doctor is the captain of the ship. The doctor comes in and writes orders after we do assessment and then we carry out the order. At the public health department it’s mostly very nurse-driven, following protocols on your own and the support structure of people higher up is really excellent.”

“There have been a lot of advances in medicine, but there have also been advances in a more humanistic approach to medicine…”

Over the course of his long career Karl names the loss of local doctors on call as one of the major game changers in community healthcare. “The local docs did more in the ER than they do now,” Karl says, noting that as “medicine became more specialized” more and more ER cases were transferred to other facilities.

“I remember one day we had 5 wrist fractures in one day and Dr. (Bill) Hunter set them all. Now the rent-a-docs would ship them out.”

The big improvement in local care in Karl’s view is “more professional staffing and the diagnostic equipment we have now, the expansion of the lab, and the realization of (Dr.) Jerold Phelps’ dream of having a CT scan machine here.”

One of the aspects of health in the local community Karl has seen is the growth of the homeless population “that started under Reagan.” He recalls an unwelcoming community reaction to homeless people.

In general, he notes a change in the community’s culture when the marijuana greenrush began to replace a less money-driven spirit that drove the kind of grassroots organization that led to the founding of Redwoods Rural Health Center, as well as health-promoting community projects such as the building of small local schools.

In naming other positive changes in community health care, Karl says, “You also have to look at the development of the hospice model we have here, which is not a Medicare supported hospice which is really a totally different animal. This is something the community can really be proud of.”

In the medicare hospice model, Karl says the rules demand a doc’s diagnosis of a condition that will cause death within a specified span of time and that any curative treatment for any related or unrelated issue during that time is not allowed. Local hospice services (Heart of the Redwoods Community Hospice) are far less restrictive and more patient and family driven to provide the best individualized care, even when a diagnosis is not yet terminal.

“Those medicare hospice facilities are all owned by big profit-making corporations,” he adds.

Karl also names the Affordable Care Act’s provisions for community health outreach, as well as making care more accessible through affordable insurance, as a boon to local healthcare. Along with proactive and preventive programs such as exercise classes and health education, the expansion of the healthcare district’s mission made it possible for the district to bring an end to years of subpar pharmacy services by establishing the Garberville Pharmacy.

Karl also is pleased to see that birthing services, thanks to Carolyn Eldridge’s spearheading of the program at Redwoods Rural, are returning to our community at a time when travel for these services is becoming a prohibitively expensive barrier to care.

The expansion of mental health care is another improvement Karl sees in the community. “The geriatric program that the hospital started as well as the therapists that we have at Redwoods Rural who are handling cases of things like anxiety with Medicare coverage” complement the expansion of county services for more severe mental health ailments. After an interruption of in-person service during the pandemic, many services are being restored or shifted to telehealth delivery.

“I think we need a single payer system,” says Karl of how healthcare is paid for in the US. “The fact that we don’t have that is disgraceful. The higher drug prices and the free rein that the pharmaceutical companies have does not foster innovation, it only fosters profit. The Democrats are touting how they brought down drug prices, but it’s only for about eight drugs and it’s not kicking in for three more years. It’s something, but I think it would have been more expansive if Kyrsten Sinema wasn’t bought off by the pharmaceutical companies.”

Karl would encourage young people to go into nursing today. “Finally the compensation is commensurate with the training. And if you want a profession where you’re involved with people, developing relations while using your science and your brain, nursing is great. There’s an art to it and a science to it.

A nurse going to school now could expect to start close to $50 an hour. “When I started here I got an extra 15 cents an hour for having a bachelor’s degree rather than an associate’s and I made $8.30 an hour. That amounted to $300 more a year for a bachelor’s. I encourage people to get a bachelor’s. Another reason to be a nurse is you can go anywhere and find a job.

“…there just wasn’t much for me to do. We all thought covid was over.”

Regarding the pandemic, by which time Karl was working for Public Health, Karl comments: “I think it’s really sad how Dr. Frankovich [Humboldt health officer who was in charge of the local pandemic response] was disrespected by the whole anti-vax thing.” Karl’s duties changed from being out on the road making home visits to “being stuck in the office talking on the phone and looking at the computer. I got trained as a contact tracer and Humboldt County was kind of ahead of its time. We had developed our own software.”

When covid dipped into one of its early ebbs, Karl remembers getting referrals for potential home visit clients, but “people still didn’t want to see us. That’s sort of when I decided to retire, because there just wasn’t much for me to do. We all thought covid was over.”

Karl notes that covid is still the second leading cause of death in the country and that 500 people a day are still dying of the disease. “I can see why people are sick of it, but I’m still wearing a mask when I go into stores.” Karl has volunteered at numerous local vaccination clinics. “I like poking people.”

He mentions a study showing that if you get covid past the age of 65, your risk of Alzheimer’s disease increases by 80 per cent after recovery.

With 37 years of experience in his field in the Southern Humboldt community Karl has been a keen observer of cultural and professional change, always with his finger on the pulse of political influence, but always maintaining a deep connection to his patients, clients and colleagues. With roots in the counter-culture, while his profession made him a bridge to the old-time families who were his co-workers at the beginning of his career, he is a reflection of the melting pot of our community, perhaps drawing from his foundation in art to synthesize a brilliant career.