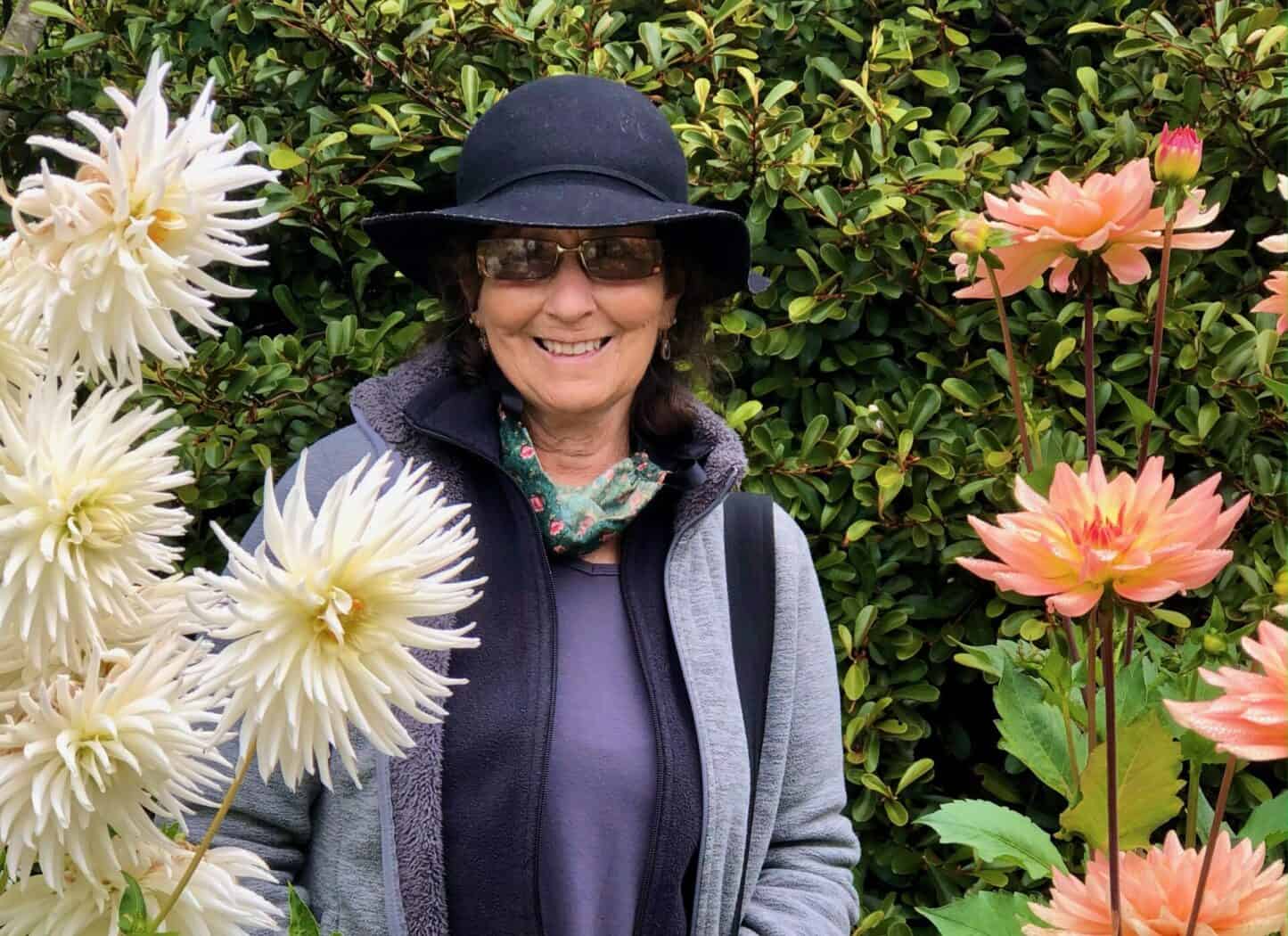 This week we continue our series of visits with some of the longtime members of the local healthcare community. Linda Candotti, PA-C, has worked in healthcare in Southern Humboldt for almost 40 years.

She pioneered the role of the relatively new certification known as Physician’s Assistant at a time when hardly anyone in the local medical world even knew what that was. She has worked locally at Redwoods Rural and the Southern Humboldt Community Healthcare District’s Garberville clinic, at a private practice in Fortuna, and has done additional work in emergency rooms in Garberville and the Bay Area. Now working three days a week at the Southern Humboldt Community Healthcare District clinic, Linda is one of the most experienced and popular providers in the area.

What is a Physician’s Assistant?

As a Physician’s Assistant, Linda can do many of the things a doc can do. She was able to train with 17 different providers, including many specialists to acquire the skills required to become a PA. PAs were originally conceived as a way to make up for shortages of MDs in various circumstances and now have become a cost-cutting presence in clinical and hospital settings nationwide. While technically supervised by a physician, in our rural setting where most providers do a little of everything, PAs enjoy a good amount of autonomy.

“I knew I wanted to go to PA school in the mid 80’s, so I took a variety of positions at Redwoods Rural to get some experience with humans since I had previously been working with animals at the vet’s office in Garberville.” Linda started as a receptionist and then trained as a medical assistant and lab tech at RRHC before beginning her PA program in 1986 and graduating the next year.

“After I graduated I went to work at Redwoods Rural and also in Fortuna at a private practice for Drs. Olkin and Jones where I worked for over 30 years.” Locally, Linda was supervised by local physicians Bill Hunter, Jerold Phelps and his son Mark. As Redwoods Rural and the Garberville Clinic went through some conflicts, she worked at both locations.

“I actually worked as a trial liaison for Redwoods Rural in the ’90s and the hospital when they decided to do the Shelter Cove Clinic at the fire station out there. The hospital ran the clinic and Redwoods Rural asked me to be one of the providers to make a link in the joint effort.”

After her time in the Shelter Cove clinic Linda moved to San Francisco to polish her emergency room skills. “I worked for several ERs in the Bay Area and then when I came back I picked up a day at SoHum Health [SHCHD] and continued to work at Redwoods Rural and part time in Fortuna.”  This included helping cover the ER along with the other local providers in the days before ER coverage was provided by outside contractors.

“It was a lot more fun before. Especially in an area like this…”

In 2012 Linda was diagnosed with breast cancer which was later complicated by leukemia most likely caused by one of the drugs used to treat her breast cancer. She had to take a couple years off for treatment and is now in stable sustained remission.

“When I came back after I was sick I went to work at the Garberville clinic three days a week and that was enough.” She has been there ever since.

Linda has seen a lot of changes in how healthcare is administered over her career. “It was a lot more fun before. Especially in an area like this, working with country medicine doctors that could do pretty much anything they wanted to. But now we spend so much time arguing with insurance companies, getting prior authorizations for everything and it takes away from our ability to do what we need to do.”

Referrals to specialists are much more difficult to arrange now.  We used to be able to call up and talk to specialists and now most everyone is walled off. In this area where we have a shortage of specialists the delay in getting care can be very hard for people. For some people it could make a big difference to not have to wait so long for services.”

Linda says when someone is dealing with a serious issue she and her colleagues now have to apply a lot of pressure to get their patients seen at the next level without undue delay. She also remarks that there is an area-wide shortage of primary care providers and that there are many patients at the Garberville clinic that are traveling from an hour away or more to get care.

“As Linda’s practice has matured, so have her patients as well as her perspective on the health issues in the community.”

Linda says she is probably in favor of a single payer type of health insurance program. “I’m not that well-versed in the pros and cons of that system, but I am in favor of anything that removes some of the restrictions we deal with. The prices of medication for things like hepatitis C or chemo for example are just astronomical and it just doesn’t need to be that way.”

Linda mentioned that the Southern Humboldt Community Healthcare District (Garberville) Clinic, as well as the Garberville Pharmacy participates in the federal 340B program which enables hospitals, clinics and other providers to provide prescription drugs at discount prices to clients.

As Linda’s practice has matured, so have her patients as well as her perspective on the health issues in the community. “When I started we did a lot of prenatal care and deliveries. People used to think I was just a women’s health provider because that was such a big part of what I did. Now, as my patients have aged I see a lot of chronic illnesses and things that older people tend to come in with.  I don’t know the statistics of age breakdown in our community, but it feels to me like there is a large portion of our community who are getting older. I know there are some young families here, but it seems like quite a few young people move away.”

Now that deliveries are no longer done locally and women need to go elsewhere for birth services, Linda acknowledges this fact may skew the numbers. However, SoHum Health now has Laura Mojica, a pediatiric nurse practitioner on staff, Linda says, “we are rebuilding our pediatric clientele.”

Healthcare in a rural community.

“…the rural setting allows Linda to both acquire and use more skills.”

Being a provider in a rural setting has its pluses and minuses. “Lack of specialists can make it hard to get things done and I sometimes refer people to San Francisco where they can get care a lot faster than if they stayed in the community.” The trade off is that the rural setting allows Linda to both acquire and use more skills. ” For example, we don’t have an orthopedist, so I get to do casting. We don’t have a gynecologist so I get to do colposcopies. A lot of primary care providers don’t do those things because they refer to the specialist around the corner. I really like the variety and getting to use so many skills.”

Linda sees the rapid evolution of treatments and therapies for disease as one of the most promising aspects of modern medicine. “Even the leukemia treatment I did a few years ago is totally different now. Those advances are really spectacular.”  Linda sees self-care as crucial to good health and notes that our community has always had a high health consciousness and that “people are more knowledgeable now and they realize that making changes in their behavior can really change their health. At both clinics [Redwoods Rural and Garberville]  it’s always been a big part of our philosophy to really let the patient navigate their own care. I never tell someone they have to do something. I tell them this is what I know and this is what I think is best, but I’m not going to not take care of someone if they don’t do it. It’s still their choice. And things change, I mean what do I know? We told all menopausal women to take estrogen when I started, and then later we found out that was not the best choice and had to take them off it. So I take it all with a grain of salt.”

At one point in Linda’s cancer treatment she went against her doc’s advice and when it was all over he admitted to her that despite how scared he was by her decision he realized in the long run that she had made the right choice for herself.

Linda misses the simplicity of the way medicine was practiced before. “It’s just become too complicated and too expensive for people to get the care they need. Too many government regulations, too many decisions made by insurance companies. The system we have has gotten out of hand and I would really like to see us get back to a more simple way of being.”

She does acknowledge the benefits of one modern addition to patient care and that is telehealth. Online meetings and consults with providers save time and money for the patient and the provider when a face to face meeting is unnecessary. “Around here, it’s been really good because so many people live far out. A lot of times I can call people to go over lab results or discuss prescription refills or make arrangements to order tests, and I don’t really have to see someone for that, there’s nothing I would do differently by seeing them, so there’s no reason to come in for every little thing.”  Telehealth also enables consults with far away specialists, widening the umbrella of care for rural patients. This was greatly expanded since the pandemic made face-to-face visits problematic.

The SHCHD clinic has added behavioral health counseling to its services with a provider who is so far able to see only Medicare patients. There is a waiting period to be credentialed to accept all types of insurance. This is another example of what Linda sees as the problem of over-complication, that more hoops will have to be jumped through before the new therapist can see all patients. “I wish we could have a whole mental health clinic in this area. It’s hard to get people the services they need unless they end up in crisis and then you can hospitalize them, but it’s better to get them some care before it gets to that point.”

With a lifetime of service under her belt in Southern Humboldt and a history of dedication to rural healthcare, Linda is pleased that there are programs encouraging young medical professionals to take rural positions and has worked with new providers participating in the program and is currently working with PA students, some of whom have been inspired by the same things she values in rural healthcare: community and the ability to use a wide variety of skills. It is a good feeling to know that this local beloved provider is able to pass the torch of her special brand of service and dedication to the next generation.