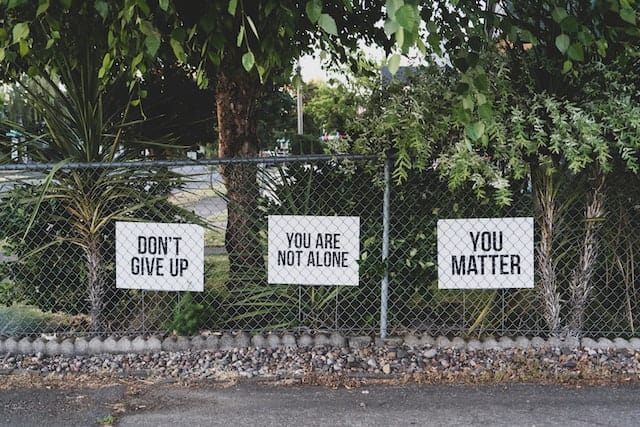 Photo by Dan Meyers on Unsplash

One of the biggest problems with talking about suicide is that we’re not very good at talking about suicide. In many cases, it’s seen as a sensitive subject that should be discussed very carefully, if at all. This is far from an ideal approach to a problem that thrives in conditions of silence and loneliness. Those who consider or commit suicide are often considered weak, cowardly, unsuccessful, or even selfish by those around them or even themselves. Deep feelings of guilt or shame often fuel a spiral of solitude, silence, and depression, and for some reason, our society is only beginning to accept that these experiences are not some defect of the individual but a consequence of common and preventable mental health issues.

It is estimated that over half of all mental health conditions, including those that can lead to suicide, go undiagnosed or untreated. This is largely due to the well-established stigmas against receiving such treatment in the first place. Despite statistics which indicate that up to 90% of all suicides and suicide attempts are related to poor mental health, many are hesitant to even consider something’s gone wrong upstairs. People are much more likely to be sympathetic or understanding of mental health issues if they know someone who suffers from them, but there are lots of folks who never feel safe sharing their darker feelings, even with their loved ones. As long as we are pressured from within or without to keep our struggles private, many of us may never realize how much our friends, family members, and coworkers might be suffering – or how much sympathy and understanding they might have for our own experiences. It’s not easy ice to break.

Talking about suicide may be one of the best methods of suicide prevention.

Perhaps part of the reason so many people are so uncomfortable talking about suicide is the growing evidence that such thoughts aren’t exactly uncommon. While most of us would not go through with it, plenty of folks have had a low moment or two where the idea of not existing seemed fairly appealing, particularly during the turbulence and drama of adolescence and young adulthood. Some studies indicate that around 25% of young people have seriously considered the idea, and incidentally, suicide is the second most common cause of death for young people aged 10-34 in the United States. If those numbers aren’t scary enough for you, remember that these statistics only represent the folks who admitted it: the actual numbers could easily be much higher.

Like any health issue, the more data we have, the more effective our attempts at mitigation will be, but when data is limited due to social or personal issues, it becomes much harder to see the whole picture. There’s even a popular myth that talking about suicide actually increases the chances of a person seriously considering it, despite plenty of studies and evidence to the contrary. In fact, talking about suicide may be one of the best methods of suicide prevention, as almost any sincere person may help provide the victim with a broader perspective on their issues and mental health, and help connect them to support.

This generation of youngsters might actually be standing up to suicide with more honesty and integrity than those who came before.

For as much as we love to harp on the internet and what it’s doing to those poor kids, there’s growing evidence that suggests that young people are increasingly researching and exploring their own mental health issues online, with one study estimating that 90% of those aged 14-22 have done so. The data indicates that 75% of those seeking information were looking for personal anecdotes or stories about experiences and struggles with mental health. While this is by no means a solution to the problem outright, it indicates that the combination of youth and technology is helping to destigmatize mental healthcare, and suggests that this generation of youngsters might actually be standing up to suicide with more honesty and integrity than those who came before.

Common warning signs of suicidal thoughts include talking about suicide, withdrawing from friends and family, experiencing dramatic mood swings, an obsession with mortality, an increased usage of alcohol or drugs, giving away belongings or saying goodbye to friends or family, and an increase in anxiety. If you know someone who is exhibiting suicidal or unusually self-destructive behaviors, reach out to them or to their friends or family. Even knowing that someone cares enough to say something can be a huge step in the right direction.

You are not alone

If you are experiencing suicidal thoughts, you’re not alone. I’ve been there. Many of us have. And many of us may find ourselves there again – it’s okay. Try to identify the root cause and make a shift. It might feel embarrassing or humiliating to ask for help or get treatment, but embarrassment is a lot better than self-destruction. Suicide is not smallpox: we can’t lock it away forever in a lab, but the more we can become honest, righteous, and outspoken about it, the more we can dispel the mythology, ignorance, and silence by which it spreads.

For more information about suicide prevention and mental health services, talk to your health care provider, or in Southern Humboldt/Northern Mendocino you can visit SoHum Health or call (707) 923-3921. Furthermore, the CDC operates a free suicide and crisis lifeline which can be contacted anytime by calling or texting 988.